At the very least, you should have one backup battery. Ideally, two or three. Why? Because if you recharge a battery only when it’s empty, you will no doubt go out someday with an almost empty battery in your camera, so you’ll have to change it after a couple of shots, so you won’t have any backup battery left. Also, if you happen to have forgotten to recharge that one and only backup, you carry your camera along for nothing. That has actually happened to me, so I’ve learned my lesson.
Of course, if you plan to go on lengthy treks and won’t have access to electricity, get even more backup batteries, or take a portable battery pack with you, so you can recharge on the go.

I think it is ridiculous to buy branded batteries that cost many times more than generic ones. Now, before you go up in arms and tell me generic batteries are bad, let me clear that up. Yes, there are bad batteries, and in the worst case scenarios (leak or fire), your camera might even get damages. There are some batteries you shouldn’t use even if you had them for free! But sometimes shit happens and even branded ones can cause problems. Check the customer reviews on the web to investigate, on Amazon.com for instance, even if you end up buying them in a brick-and-mortar store. In the end, do what you’re comfortable with, but for the same price, I personally prefer to buy 3 backup generic batteries than only 1 branded one. I have used a few brands over time for different cameras, and have never seen any noticeable difference even after a few years of use. Actually, of 2 batteries I’ve had for 2 years (bought together, charged the same number of times and, until now, with roughly the same quality) my Canon LP-E6 has a charging efficiency of 90{90eec13771a41cc26d170da0c9942bbbe2cbb7ce762cd02cf36c243c9400ada6} according to my 7D Mark II, while the generic one is still at 100{90eec13771a41cc26d170da0c9942bbbe2cbb7ce762cd02cf36c243c9400ada6}.

Use the batteries in alternance 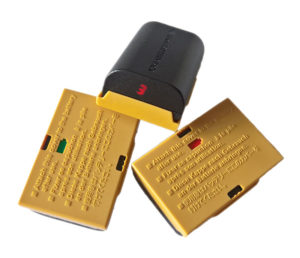 The capacity of the battery decreases with time, depending on the number of times they’ve been charged, among other factors. To avoid having a mixed set of good batteries and bad ones, which have already lost a large amount of their original capacity, use them in alternance. For me, the easiest way to do that is to number them, as you can see on the picture, and cycle through them in order. That way, the batteries are used and recharged the same number of times, thus ensuring they all have the same level of reliability. Should you buy new batteries, as I just did, simply add them to the lot and alternate between all of them. There’s no need to try and come up with a complex, and probably useless, way to take into account that some are newer than others. If at some point, one battery clearly doesn’t hold the charge any more, recycle it and buy a new one instead.

Battery charge state at a glance

Find a way to easily know which batteries are charged and which are not. This is definitely not a critical thing, of course, but I find it’s useful. When in doubt, you could put it in your camera and check the charge level, obviously, but if you’re anything like me, you won’t want to spend time doing that on a regular basis. And putting them in a different place in you bag is doomed to fail, too, trust me 😉 Personally, my favorite method is to use the small battery-shaped hole in the battery covers that come with the Canon LP-E6 (generic replacement batteries have it, too). The color of some of the text on the battery label is green, so with cover placed one way, it could indicate “charged”; after changing batteries, put it the other way around to remind you it’s empty (not “green”). It’s not that obvious without really looking at them, though, so I make red and green marks on each battery I have (any permanent marker should do it, but I like the opacity and brightness of acrylic markers). Now, a quick glance is enough to know which of my batteries need to be charged. If you battery covers do not have that battery-shaped hole, just find another, similar way to make it obvious which ones need charging.


Get a USB charger

Again, this is not absolutely necessary, but a charger with a micro-USB connector can make your life easier, especially if you travel a lot. They are a lot of quite cheap chargers, even some that can charge 2 batteries at a time.
The main advantages are:
a. Space/weight: The charger itself is a lot smaller than my original Canon charger (even without the cable).
b. Connectivity: Using the same USB/micro-USB cable (+ outlet adapter) I always take with me for other electronics, it’s much easier to recharge my batteries wherever I am: from an outlet, a USB charger in a car, my laptop, a battery pack, or even from a portable solar panel.
c. With my specific model, I can recharge either 1 or 2 batteries at once. It does take much longer to charge 2 batteries than a single one on my original charger, but at least I don’t have to wake up in the middle of the night to charge the second one 😉

I hope those few tips help. Don’t hesitate to share any other advice you have in the comments below.

View all posts by Michaël

This site uses Akismet to reduce spam. Learn how your comment data is processed.

Some articles are not in English yet. Check out what’s available in Spanish/French.