After a recent update of Photoshop CC 2015.1 (around the end of November or early December 2015, I didn’t really pay attention), my custom workspace disappeared. Indeed, when opening Photoshop after that update, the interface was set to the default “Essentials” workspace and the one I had customized and used for the last couple of years wasn’t even in the list. Fortunately, it was not completely removed from my system and I could restore it.

This is how I could restore my custom workspace in Windows 7: 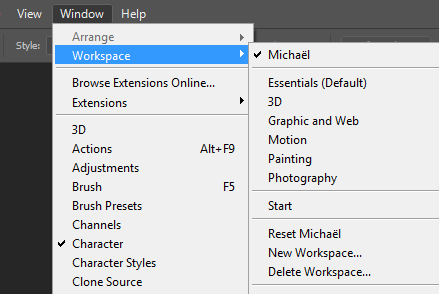 Interestingly enough, Photoshop made a copy of the custom profile in WorkSpaces (modified), so that file is now in both folders.

Hope that helps if you someday encounter that issue.

View all posts by Michaël

This site uses Akismet to reduce spam. Learn how your comment data is processed.

Some articles are not in English yet. Check out what’s available in Spanish/French.